The Ultimate Guide to ACT Prep in 2022 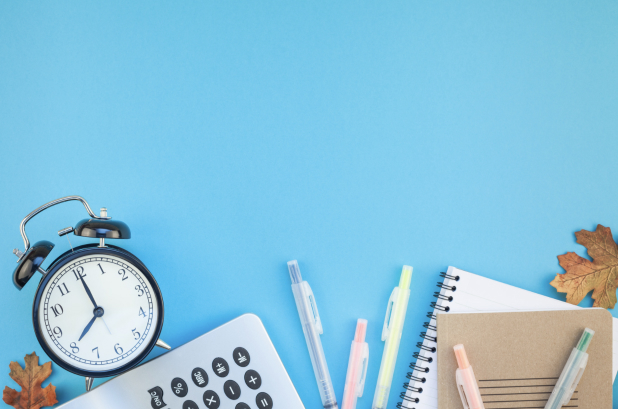 Standardized tests are an important (sometimes dreaded) part of the college admissions process. It’s a hurdle that students can overcome with the right preparation and support. But what is the ACT and how do you get your best score so you can get into the college of your dreams—and win scholarships in the process? This guide to ACT prep walks you through the details of the test, how to register, when you’ll get your scores, and what to expect!

Keep reading and do what you can to jump your score and invest in the best-paying job a high school student can have.

What is the ACT test?

How long is the ACT test?

How do you register for the ACT test?

How much does the ACT cost?

What are the ACT test dates?

How is the ACT scored?

What is considered a good ACT score?

How important are ACT scores for college?

What ACT score is needed for college?

What ACT scores get scholarships?

How do SAT scores compare to ACT scores?

When will I get my ACT scores?

How much does it cost to send ACT scores?

How can you improve your ACT score?

What is the ACT test?

Colleges use the ACT as a standardized test  to make admissions decisions, make scholarship decisions, and assess college readiness among students. The ACT consists of four sections—English, Math, Reading, and Science—and an optional Writing section.

The test is multiple choice with specified time limits for each section. It has a total of 215 questions, with a composite score range from 1-36 (writing section scores range from 2-12). The test is administered at locations across the country seven times each year.

How long is the ACT test? 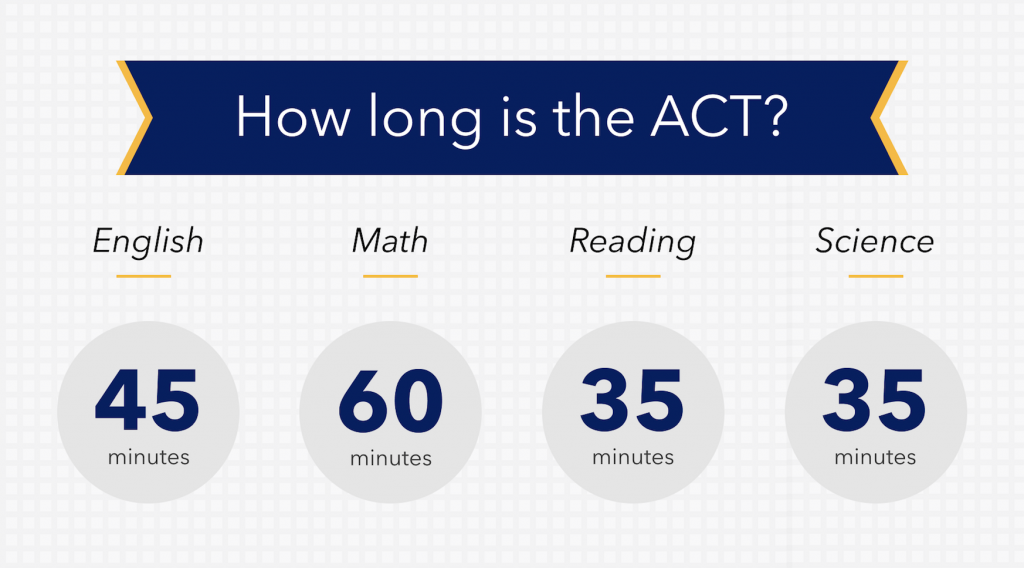 How do you register for the ACT test?

Register for the ACT test on the ACT website. Answer questions about your high school, background, family, and provide identifying information such as your name, address, and social security number. Upload your photo to be verified when you arrive at  the test site.

During this process, you also select a test site and test date. You can choose up to four colleges to send their scores to (although not required). Later, you’ll pay $16 per test date report to send scores to each college.

How much does the ACT cost?

In 2022, it costs $63 to take the full ACT test without writing. Including the writing portion increases the cost to $88 per test.

Students who are on a federal free and reduced lunch program can receive 4 ACT tests at no cost. These students are also eligible to send unlimited score reports to colleges, making the ACT affordable for all students.

But even for $63 each try, taking the ACT multiple times can be worth the time and money. Some states even use the ACT as their state-wide testing adding another option for all students to take the test for free.

What are the ACT test dates?

ACT tests are offered nationally (in most states) each year in September, October, December, February, April, June, and July. You have multiple opportunities to take the test and consistently improve your scores.

Many schools also offer the test to their students once a year during the school day, typically in states where the ACT is mandated as the required standardized test.

How is the ACT scored?

The ACT is scored on a scale from 1-36. But it gets a little more complicated when it comes to how that score is calculated.

First, the ACT counts the number of questions on each section that were answered correctly. It’s important to note the ACT does not deduct points for incorrect answers. So, there is no penalty for guessing. Be sure to fill in one bubble for each question.

Then, the raw scores are converted to scale scores. Scale scores are used to calculate your composite score. These scores vary based on the specific test, but here is a sample from the ACT website: 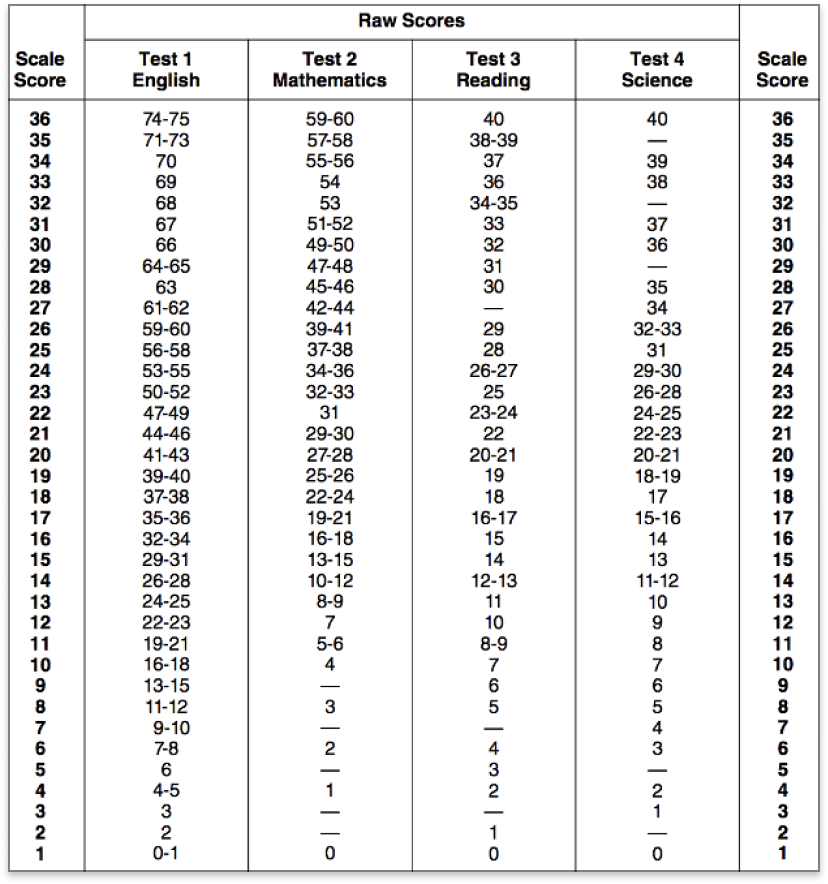 What is considered a good ACT score?

According to the most recent data from the ACT, the average score on the ACT test is 20.7. However, what’s considered a good ACT score depends on each student and their goals.

A good score for the ACT varies based on the college or university you want to attend. A 33 might get you a full-ride scholarship at a large public university but isn’t a guarantee you’ll get admitted to an Ivy League school.

Start by researching the colleges you are interested in attending. Many include average and minimum ACT scores on their websites and in their admission criteria. Next, look at their scholarships, and see what score you need to make that college affordable for you.

Ultimately, don’t just settle for a good score: work toward your best score! Challenge yourself, and study hard for the test. You might surprise yourself and get a better score than you thought you could!

How important are ACT scores for college?

Colleges use ACT scores for a number of reasons. Ultimately, they offer an objective measure to determine college readiness and class placement. This helps colleges to:

At the University of Chicago, over 80% of freshmen still submit test scores to distinguish themselves beyond their solid GPAs. Taking the test is only truly optional for students unconcerned about admission AND looking to pay full price.

What ACT score is needed for college?

The average ACT score varies based on the college, primarily the type of school you want to attend.

For larger public universities, the minimum score for admissions is typically 20-22.

More selective private or public colleges may have minimum ACT scores much higher than public universities. Research the university or college you want to attend to see what their average (and minimum) scores are.

That minimum ACT score may earn you admission but rarely merit-based financial aid. Jumping your ACT score can lower your college costs and help you graduate college with minimal debt.

What ACT scores get scholarships?

Similar to admissions, the ACT score requirement of scholarships varies by school. Research the scholarship and financial aid websites of the schools you want to attend. Or contact their admissions offices to learn more about the requirements for merit-based scholarships.

In the meantime, work to increase your test score and become eligible for more merit-based and private scholarships, as well as more generous need-based aid.

How do SAT scores compare to ACT?

The SAT test has four sections consisting of 154 total questions and lasts 3 hours. The SAT was significantly reformatted in March 2016, and, while the content is generally more challenging than the ACT, more time is given per question. 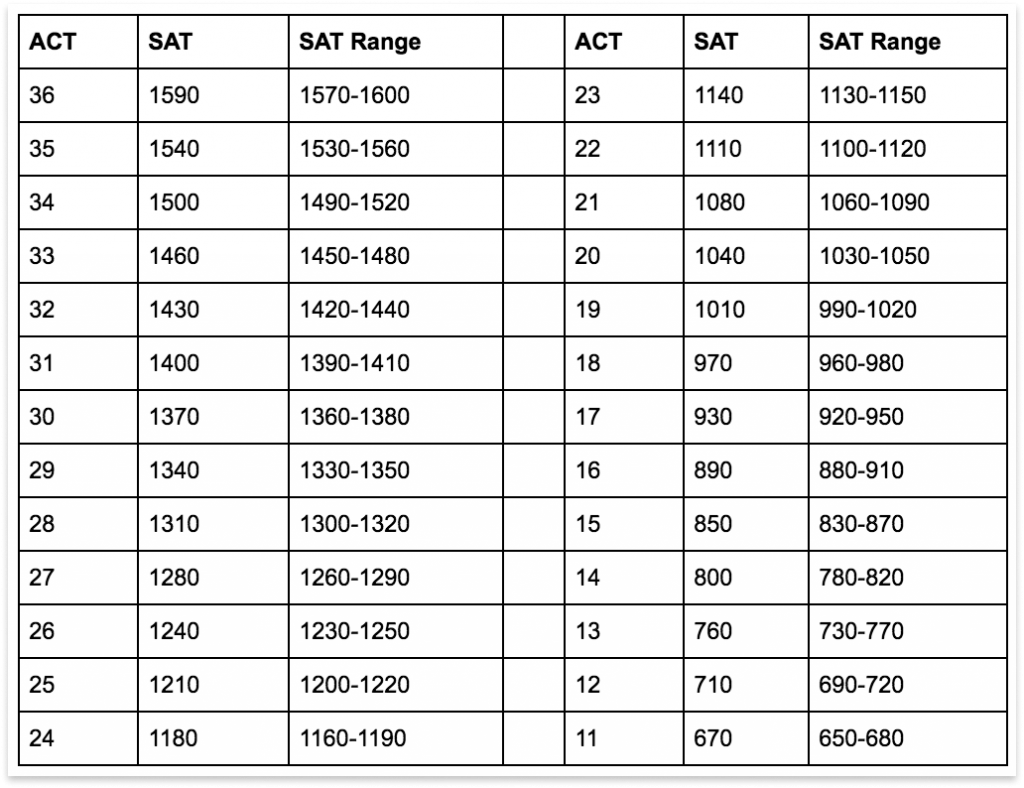 While some states mandate one test over the other, all colleges accept both exams. It may make sense for you to take both tests one time, then to focus on your preferred test, taking it three more times. Consider your results and decide where to invest your time and effort.

When will you get your ACT scores?

The ACT typically releases scores within two weeks of the test date, but can take up to eight weeks. Writing scores are typically available within four weeks.

When your scores are available, they are posted online to your ACT account. If you haven’t received your scores in this timeframe, consider these factors.

Keep an eye out for your scores based on the ACT timeline!

How much does it cost to send ACT scores?

When you register for the ACT, you can choose to send your scores to up to four colleges. However, you will not be able to see your scores before they are sent.

If you send your scores to additional colleges after you’ve taken the test, you can request additional score reports from the ACT. It costs $16 per test date report, per college.

If you are enrolled in federal free or reduced-price lunch programs, you can send your score reports to as many colleges as you wish for free. You can also take four ACT tests for free.